There are few times when my paid job and my love job overlap. On Friday I ducked out of work and mad the mad dash in peak home-time traffic to what was the second-last leg of the Ben Hansen Australian Tour at Liverpool TAFE. 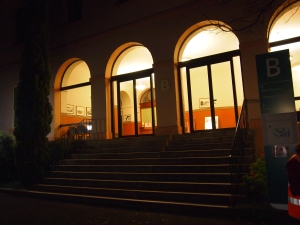 No, he’s not a musician (though he did seem to like playing the Tibetan Singing Bowl… and talking to it) but is perhaps best known for his work as Team Lead on SyFy’s ‘Fact or Faked’; an investigative reality-style series that aired from 2010 to 2014 on cable TV.

Fact or Faked is what I could only describe as the cynical middle child between X-Files and Mythbusters; a team of investigators that take a look at viral videos of various phenomena and urban legends of Bigfoot, Swamp Monsters and UFOs in America and around the world in an attempt to study their validity and plausibility outside of Youtube through experimentation and recreation.

I’d always enjoyed the series – hello; Paranormal journalist? – so I definitely couldn’t pass up the chance to experience an investigation myself and check out his take on how we do things in Australia.

This has been the second year that Ben had come out to Australia – the last time being for Paracon 2014 in the historic Maitland Gaol – and this time around Paracon organiser Alex Cayas decided to pull out all the stops; with his ‘friendly giant’ (not to sound creepy but Ben stands at 6’5”…) attending and running events in Adelaide, Melbourne, and Sydney as well as guest-speaking at Paracon 2015 in Katoomba, NSW.

I had the privilege of attending a talk with Ben last year held by Access Paranormal on identifying Hoaxes, specifically within the field of UFOlogy. One thing that I learnt is that when you attend a talk with him, you don’t just get a lecture – you get a story. Or several stories. Most of them involving encounters with government agencies that seem eerily ‘X-Files’ish.

I didn’t catch all of the Paracon VIP events last year; this year however I decided to get my creeper on and attended two events on the Ben Hansen tour. The first being an interactive investigation at Liverpool TAFE held by APPI in conjunction with Paracon events, and the second being a ‘Yowie Experience’ with Attila Kaldy from Validate.

So back to Friday night, and my mad dash for the TAFE in peak-hour; I was one of the early guests and for a brief 15 minutes I was under the impression that the group was going to be blissfully small for the night.

A very musical Ben was sitting in a beautician’s pedicure chair in the TAFE classroom that was serving as basecamp and playing a Tibetan Singing Bowl and occasionally asking it questions cheekily.

Not that this kind of behaviour could be blamed on him; after spending an almost non-stop 3 weeks of Paranormal events in three states I’m pretty sure that even I’d start talking to mystical instruments if I’d had that much constant exposure to Alex, who was acting as his chauffer, personal entertainer, butler, bodyguard and all-around minion (<3)!

The group on Friday night was a fair size, but not too large so as to cause significant problems with gathering evidence and running experiments. The night was divided into a tour and basic history of the TAFE, several hours of activities such as an Escape Room, Ganzfield Experiment and Paranormal Scavenger Hunt, and finally a little free time at the end to roam the buildings.

Of course, with Anne from Eastern States Paranormal being there with her trusty Tipping Tables, there was also a fair amount of table-tipping that yielded some freakish, yet scientifically-reasonable results. 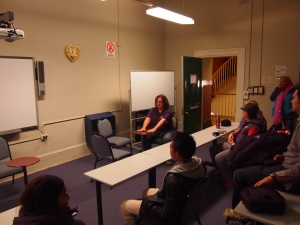 Anne getting the table all warmed up

In related news to this; according to Peet Banks – I am a Reptilian.

Ben had brought along his Therm-App; (http://therm-app.com/#whatisinfo) a device that fits onto Android phones and gives them thermal camera capability. During the table-tipping my hands seemed to completely disappear into the table, whilst everyone else’s were a normal heat.

Or maybe I really am a Reptilian!?!

Which somehow explains my love of sunbaking and cravings for protein…

The investigation was incredibly well-organised, as most events run by APPI have shown to be, with helpers every step of the way through the TAFE to point out steps, hold open doors and a wonderful late-night supper that included Jam Doughnuts, Tim-Tams, Cupcakes, Hot Chocolate and *GASP* Joystix!!!

The highlight of the night, however, was during a vigil in the Music Room – which used to be an old hospital ward – where a few of us saw a fully-formed black figure dart across the doorway to the veranda.

In the fashion of a true Paranormal Investigator I dashed through the TAFE to the doors where we had seen the figure and attempted to see if anyone was out on the veranda. There was no-one, but given the amount of APPI’s ‘helpers’ that were around through the night, it wasn’t necessarily something that we could chalk up as Paranormal.

At least not out loud 🙂

There were several personal experiences on the night as well; footsteps in K-Block where the spirit of a young girl called Helen has been seen by students and staff alike, strange noises, and psychics that were getting some rather interesting information from Spirit.

Luckily for you, dear reader, Liverpool TAFE tours are held fairly regularly by APPI (though not with Ben Hansen… ngah-ngah!) and can be booked through links on their Facebook page or http://www.appighosthunts.com/

As always it was an enjoyable night, so kudos to the organisers for putting on the event 🙂

I ended up calling it a night around 3:30am, crawling into bed utterly exhausted at 4:30am… which meant that I promptly overslept into 3pm the next afternoon.

Precisely the time I was supposed to be in Wentworth Falls for the last leg of the Tour.

Who needs sleep when there’s Beasties to be chased?!?